Undergoing surgery is a nerve-wracking experience, to be sure.  The idea of being cut open on an operating table and having your insides tinkered with, even by the most skilled surgeon, is not something most of us would choose to do unless absolutely necessary.  But sometimes surgery really is necessary, even desired on an elective basis by some, and we try to choose our surgeon and hospital carefully, hoping that the chance for anything to go wrong is minuscule. 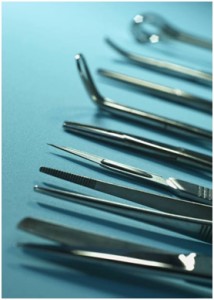 Just a couple of weeks ago, a report was published that detailed the unsettling number of “devices” – surgical sponges, towels, catheters, needles, retractors and other items used by the surgeon during surgery – that were inadvertently left, or “retained,” in patients’ bodies after surgery.

Foreign objects left inside your body after surgery are seriously problematic – they can cause illness, infection, and even death.  Surviving patients may suffer from “both physical and emotional harm, depending on the type of device retained and the length of time it is retained,” according to the report.  95% of the patients studied in the report required additional care and/or an extended hospital stay, and approximately 2% of the patients died from complications relating to the retained objects.

The Joint Commission, in its report, told the story from a 2012 New York Times article, about a woman from Kentucky who had undergone a hysterectomy and four years later, began to complain of severe abdominal pain.  A CT scan revealed that a surgical sponge had been left in the woman’s body.  “Upon surgical exploration, the retained sponge was found to have caused a serious infection, which required bowel resection.  The patient suffered from severe health issues, anxiety, depression, disability and social isolation.”

Turner & Turner are experts in litigating medical malpractice cases and one of our legal team would be delighted to speak with you at any time.