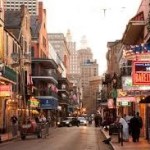 At first glance, you may not think that Detroit and New Orleans have much in common. Detroit has Midwest roots and frigid February weather; New Orleans of the Deep South is toasty and humid for much of the year.

But the cities do have some similarities: both cities have a strong musical legacy, both cities have a waterfront, and both cities have had economic setbacks. Both cities also have had a shrinking population and areas that are largely uninhabited, in Detroit’s case due to moving out and repossession and demolition of property, in New Orleans’ case, due largely to the path of Hurricane Katrina’s destruction.

And they share another legacy: a history of police brutality and communities who are determined to improve the situation. New Orleans has at times had the worst allegations per capita of police abuse.

Both cities have faced deficits that have put a lot of pressure on the police departments in terms of staffing and programming. Less community policing contributes to police brutality, studies show. In addition, one of the critical components of a less brutal police force is college-educated officers. More highly educated police officers tend to be successful graduates of the police academy, they tend to have more life experience and are able to interact more effectively with the public. And most importantly, they seem to have better abilities in terms of defusing testy, dangerous situations.

So, what is New Orleans doing? The city with a history of high brutality has just removed the requirement that officers have at least 60 semester college hours. The city took this step because they felt that the requirement got in the way of recruiting new officers. The requirement had only been around since 2010, a year that only one-third of the police academy recruits passed the examinations to graduate.

In essence, New Orleans is making a decision to increase their staffing but at the risk of hiring less educated officers, possibly ones more prone to police brutality.

Detroit Police currently do not require any college semester hours in order to enroll in the police academy, but their website indicates that those who do have law enforcement educational backgrounds will “have an edge” in the the academy’s educational components.