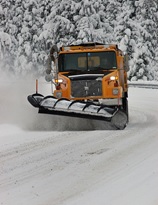 We are thankful for snow plows and their intrepid drivers. They keep our streets clear, allowing us to get to work and home and to function as best we can despite the sometimes harsh winter. As great as snow plows are, they can be tough to share the road with, so here are a few things to remember as you are driving around on ice and snow.